There is evidence of some varieties of pizza dating back to the 6th century in Persia. There were variations made along the way, but what we know of as pizza today was originally made in Naples, Italy in the early 19th century. Pizza first made an appearance in the United States in the late 19th century as Italians began to immigrate to larger cities like New York, Chicago, and Boston. As pizza spread across the U.S., different styles began to pop up. So while you may have your favorite style of pizza, the next state over may have a very different version!

At Dalia’s Pizza, we specialize in creating delicious pizza that satisfies any craving — a classic style pizza with the perfect thickness, a chewy crust, saucy goodness, cheese to die for, and all of the toppings your heart desires. Along with amazing pizza, our menu features gluten-free pizza and pasta, homemade pasta, wings, sandwiches, salads, and of course, the best desserts in West Covina. Have a craving for pizza? Get your fill at Dalia’s! 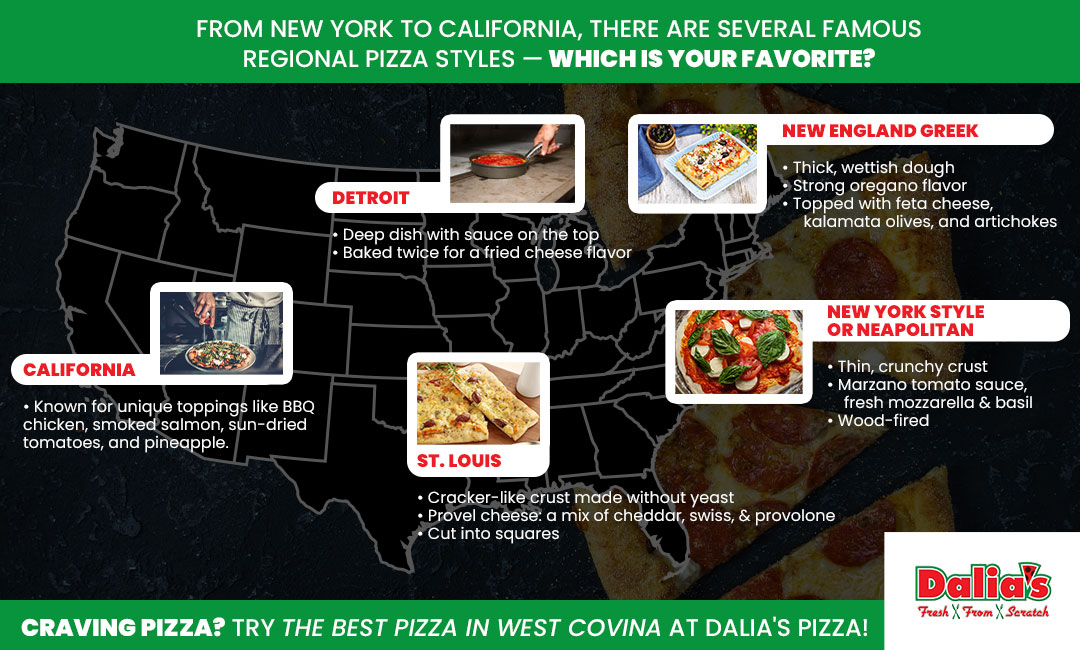 Different Styles of Pizza Across the U.S.

From New York to California, there are several different styles of pizza that are incredibly delicious. Even though we believe Dalia’s is the best pizza in West Covina, we have to give props to these famous styles.

The ultimate New York style ‘za — the thinnest crust, fresh Marzano tomato sauce, buffalo mozzarella, and basil. You can’t go wrong with a classic pizza with minimal toppings so that the focus is all on the freshest tomato sauce and clean, fresh flavor of mozzarella and basil. This style of pizza is baked in a wood-fired oven to create a perfectly crunchy crust.

If you’re craving a thicker crust and love classic Greek ingredients, a New England pie is a great choice. Found throughout the New England area, this pie was brought over by Greek immigrants who made a home along the east coast. It is characterized by a medium thick crust, a wettish dough, and is baked in a greased cake pan or cast iron skillet to create a perfect crunch and golden crust. Topping this pizza is feta cheese, artichokes, kalamata olives, and a tomato sauce that is full of oregano.

If cheese is your favorite part of the pizza, you’ll love the Detroit style pizza. This version is similar to a Chicago style with a deep dish crust and the tomato sauce is sometimes added to the top of the pizza. Detroit style is baked in a square dish with plenty of oil to develop an incredibly crunchy crust with caramelized cheesy edges. The pizza is also sometimes baked twice, which gives the crust even more crunch and a fried cheese flavor.

One of the more famous styles of pizza out of the classic New York style, Chicago deep dish is certainly a meal to remember. The pie is baked in a pan with tall edges, giving the pizza its name, but the crust itself is actually fairly thin. The pizza is baked for longer than other styles so the ingredients are piled in upside-down to ensure the cheese doesn’t burn. Pack the pie with your favorite ingredients, but traditional deep dish ingredients are sausage and pepperoni.

Even though it looks like a classic New York slice on the outside, this style of pizza is quite different. Originated in the 1960s, the St. Louis style is famous for a cracker-like crust that is made without yeast. And instead of mozzarella, it’s topped with Provel cheese, which is a combination of cheddar, swiss, and provolone and has a buttery flavor. The sauce has a slightly sweet flavor, and the pie is cut into squares rather than triangles.

Made famous in the 1980s by Chef Ed LaDou, California style pizza uses a traditional hand-tossed crust that is similar to a Neapolitan and has a chewy texture. The toppings are what makes California style ‘zas stand out — instead of sausage and pepperoni, you’ll find options like barbecue chicken, smoked salmon, broccoli, sun-dried tomatoes, goat cheese, peanut sauce, and of course, pineapple.

Even though Dalia’s Pizza has several locations throughout Los Angeles, we serve up a traditional style pizza using the freshest ingredients and a perfectly chewy crust. If you’re looking for a family-friendly pizza restaurant with a menu that will make everyone happy, visit Dalia’s Pizza tonight.