It’s true that there are some people who have a second stomach just for dessert. No matter how much pizza, how many wings, or how much pasta they ate during dinner, there is still room for something sweet at the end of the meal. And the team at Dalia’s doesn’t think there’s anything wrong with that, especially if you have a selection of Italian desserts to choose from.

One of the more popular Italian desserts, cannolis are made of a fried shell filled with a combination of ricotta cheese and powdered sugar. The tips of the cannoli are often dips in a certain topping, such as chocolate chips, pistachios, or almonds. The creamy texture and the not-too-sweet filling combined with the crunch of the shell is a perfect way to finish a meal. 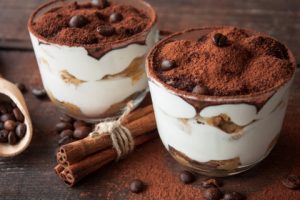 If you like coffee after your meal, but still want something sweet, you can get both when you order up a slice of tiramisu. The coffee-flavored Italian dessert is made with ladyfingers dipped in coffee, layered with a filling made of mascarpone cheese, egg, sugar, and cocoa. Tiramisu means “pick me up” in Italian, so if you need a boost of energy after a meal full of pizza, then you can’t go wrong with this classic dessert.

Although more typically eaten with coffee or tea for breakfast or a snack, biscotti can also be served as a dessert. Biscotti are twice-baked biscuits that are traditionally almond-flavored, and are sometimes dipped in chocolate. A great piece of biscotti will be crunchy and can hold together when dipped into your drink of choice.

These are essentially Italian donuts filled with a pastry cream, most often either vanilla or chocolate. They can be served for breakfast, a snack, or as a dessert. These donuts are quite similar to those found in the U.S.; they are fried, coated in sugar, and filled with a cream. They are irresistibly light and easy to eat.

This mouth-watering Italian dessert is a type of pudding thickened with gelatin and molded. Meaning “cooked cream” in Italian, the dessert is made with cream, half and half, sugar, vanilla, and gelatin. Though it may sound like a rather plain dessert, it is typically topped with a fruit sauce and fresh fruit, caramel, or chocolate. 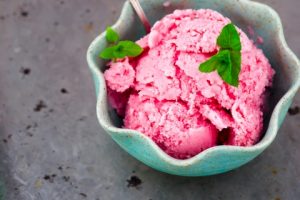 Gelato may be what people think of first when they think about classic Italian desserts. Gelato is made similarly to ice cream, but typically uses more milk and less cream and generally doesn’t use egg yolks, which is a common ingredient in ice cream. Gelato is usually creamier as well.

This dessert is a nougat confection made of honey, egg whites, almonds, wafers, hazelnuts, and vanilla. It is traditionally served around Christmas time in Italy and Southern Europe. Cut into small pieces, it’s easy to take as much or as little as you want after a meal.

Dalia’s pizza in West Covina is an Italian restaurant serving up authentic pizzas, pastas, as well as American favorites, and you guessed it, desserts. We offer cheesecake, tiramisu, and favorites like chocolate cake and carrot cake. We also offer vegan desserts, including chocolate chip cookies and chocolate cake. If you haven’t had enough to eat after a delicious pizza, you can certainly indulge in a favorite Italian dessert.

Check out our menu, and order up from Dalia’s in West Covina tonight!