Pizza today can be anything you want it to be. You can choose from dozens of toppings, different types of crust, and different types of sauces in order to create the perfect combination to satisfy your taste buds. You can have pizza for all meals of the day, including breakfast, lunch, dinner, and as a snack. Pizza has become a food to be enjoyed whenever you want.

Dalia’s Pizza in West Covina serves the best pizza. We are open for lunch and dinner every day of the week, where we not only serve up delicious pizza made-to-order, but we also offer pasta, shakes, vegan pizzas and pastas, and gluten-free options. We aim to be your favorite family pizza restaurant. Below, we’ll examine some of the different types of pizza sauces you can put on your pizza. Visit us today! 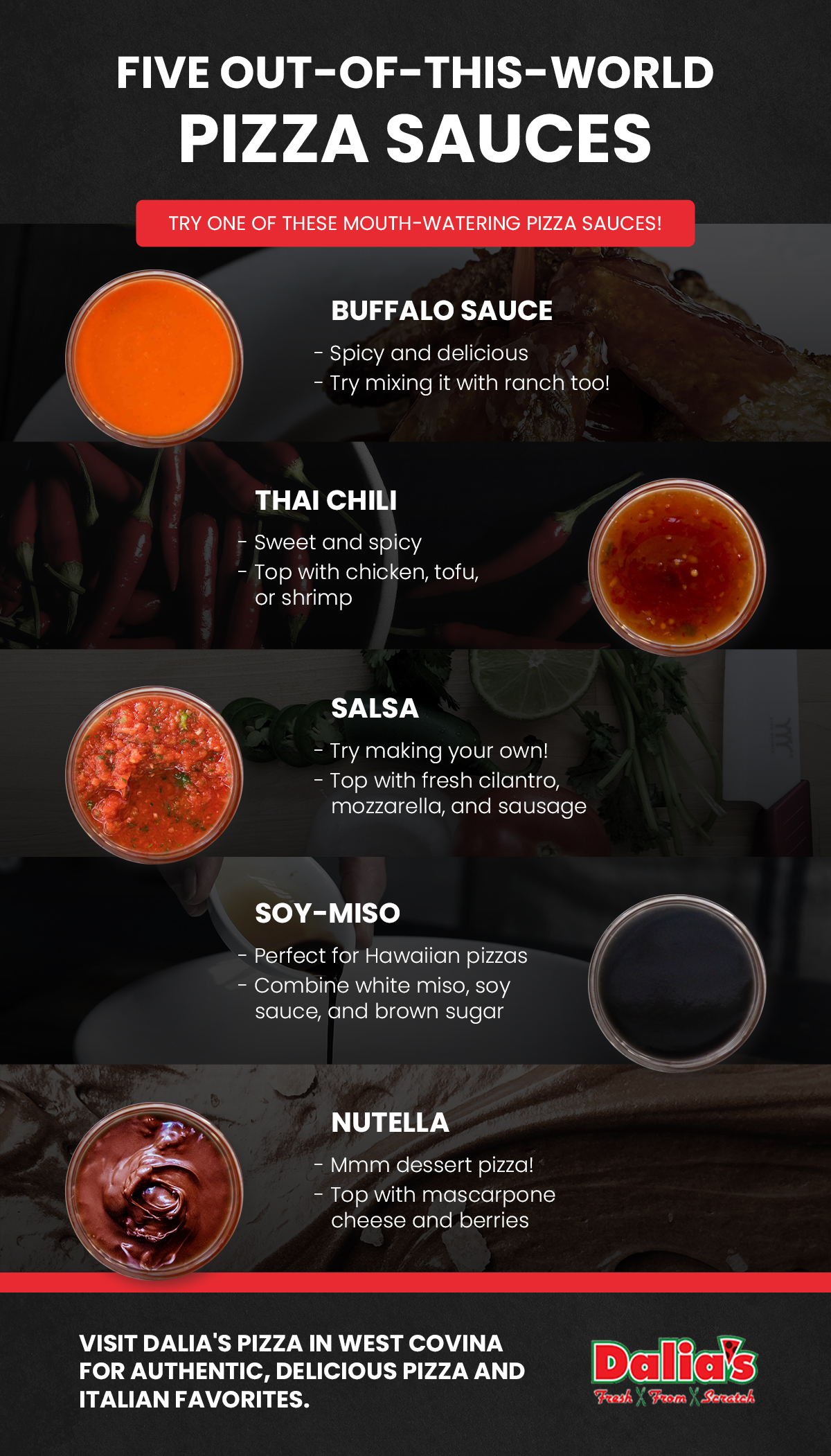 If you want a classic flavor like Buffalo sauce to give your pizza a not-so-classic taste, then you’ve got yourself a winner. It won’t take much sauce to give each bite a kick of heat, so this is a great opportunity to add additional cheese to the pizza to balance things out. Or, you can mix the Buffalo sauce with ranch to create a spicy-cool flavor that works amazingly well with chicken as a topping.

If you can’t decide between sweet and spicy, you can do both with a great Thai chili sauce. And you can’t go wrong with creating an Asian-themed pizza, which can be healthy and is definitely delicious. Try it with chicken, tofu, or shrimp, and add vegetables like snow peas and bell peppers.

The beautiful thing about salsa is that there are so many variations with different flavors, levels of heat, ingredients, and every texture from smooth to chunky. This makes using salsa as your pizza sauce an award-winning idea. Use your favorite brand from the grocery store or even try making your own to create a delicious pizza that you’ll never forget. Sprinkle on fresh cilantro, mozzarella, and try sausage with a strong oregano flavor.

Another Asian-themed pizza sauce option is soy-miso. Combine white miso with soy sauce and brown sugar to create a sauce that is made in Hawaiian pizza heaven. Not everyone is a fan of Hawaiian pizzas, but before you give up on these toppings, try it with a non-tomato sauce and you won’t regret it.

Yes, dessert pizzas are a thing! And there’s no better combination than Nutella, mascarpone cheese, and your favorite berries – we recommend raspberries. Finish the pizza off with a sprinkle of brown sugar and bake the pizza until the sugar is caramelized. The decadent flavor of the hazelnut-chocolate spread and the fresh juicy berries with creamy cheese – mmmm.

Other Flavor-Ful Types of Pizza Sauces

The traditional type of pizza sauce, tomato-based sauce tastes well with a wide range of ingredients. However, pizza in its earliest form was just a flat piece of bread with toppings. Archaeologists know that people were eating flatbread from as early as the 5th century AD in Persia. In the Middle Ages, flatbread became a type of plate that was used to hold other foods. However, tomatoes were a plant that grew in the Americas, remaining unknown to Europeans until the 1500s. At first, Europeans thought the tomato was poisonous. Once this fear subsided, it still remained out of style since many thought it looked rotten and didn’t like the flavor.

However, when you are poor, you’ll eat anything despite its reputation. The poor people of Naples, Italy, took tomatoes and mixed it in with the other ingredients they frequently used, such as olive oil, flour, cheese, and herbs. Thus, tomato sauce was born. Soon, they added this to the flatbread of the day, along with cheese, and this delicious concoction called pizzaiolo soon spread and became a hit. Dalia’s Pizza offers the best tomato-based pizzas in our pizza shop in West Covina. You can expect just the right amount of flavor that won’t overpower the other ingredients with our tomato sauce pizzas. Try one today!

White sauces use milk or cream as their main ingredient. The origins of white sauce are a bit more debated with various people claiming to have invented it. However, we do know that white sauce was most definitely invented in Italy. White sauce came after tomato-based sauce, mainly because of the problem of spoilage. Without refrigeration, milk and cream did not last that long, so it had to be consumed immediately or risk it spoiling. What we do know is that in the late 1500s or early 1600s, someone in France took boiled milk and mixed in flour and butter to create the first white sauce. This sauce became extremely popular, mainly due to the fact that only the rich and the royal could consume it due to its inherent nature to spoil. Known today as Bechamel Sauce, the inventor remains debated, being attributed to various chefs to the French royals. The name, however, is from the Marquis Louis de Bechamel (1603-1703) who was the chief steward of King Louis XIV.

One thing that Dalia’s Pizza, a pizza shop in West Covina, knows is that white sauce makes for scrumptious pizza. Our homemade Alfredo sauce is one of our most popular choices for pizzas. This sauce pairs well with cheeses and with ingredients, such as chicken, lemon, artichokes, and squash. When you’re in our area, stop by, and try out Alfredo pizza today!

Oils have been used for centuries in cooking. Olive oil especially was the main oil used in Europe due to the fact that olive trees grew extremely well in the warm climates of the Mediterranean. Thus, pin-pointing when oil was first used on flatbread would be impossible, as this was a favorite way to eat bread since the ancient Romans. However, we do know that in Naples around the time of the tomato sauce (the 1500s), people ate bread with oil, garlic, cinciielli (which is a type of small fish in the Mediterranean), anchovies, and cheese. Today, you’ll find pesto sauce, olive oil, and garlic are still popular as pizza sauces. These can be simple or more complex with added flavors and spices.

Dalia’s Pizza offers an amazing extra virgin olive oil as our oil sauce of choice for our pizzas in West Covina. Olive oil soaks into the crust while baking, making it crispy and savory. When topped with the freshest ingredients, such as mushrooms, black olives, and pepperoni, this pizza is light and refreshing. It’s a popular lunchtime choice. Try one today!

All other sauces fall under the category of specialty sauces. Some of these are not sauces at all, but serve as the base of the pizza on top of the bread and beneath the main ingredients. Some of these include BBQ sauce, mascarpone, or hummus. Because BBQ sauce can be a bit overpowering due to its strong taste, it’s best to pair this with stronger-tasting ingredients, such as chicken, onions, and peppers. Salsa has become a popular topping for a more Latin flair, especially if you are adding in beans, corn, or even chorizo as toppings. If you are looking for a pizza dessert, choose Nutella as your sauce of choice. Nutella goes great with bread. Add in a sweet cheese and berries, and you have a dessert pizza to relish. These pizzas are made-to-order at Dalia’s Pizza in West Covina.

Dalia’s Pizza has been serving up the best pizza to the residents of West Covina since 1990. We have seven locations in the Los Angeles area, specializing in Italian pizza. Our mission is to be your family pizza shop of choice, offering up something for everyone, including those with specialty diets. We offer a wide range of vegetarian, vegan, and gluten-free options. Along with pizza, we carry pasta, subs, appetizers, salads, and desserts. We offer dine-in or delivery options, so you can have a night in when you wish.

Our pizza restaurant offers homemade goodness that will not only satisfy your craving for pizza, but will also have you ordering some to take home for later. We open at 10 am every day for those who like to eat an early lunch, and we’re open late for those who like to eat a late dinner or who had a busy day and couldn’t stop by sooner. Packed with goodness, our pizza and other foods are a hometown favorite. Stop by today, and see what everyone is talking about!